Author’s note: I took this trip back in March 2015 and wrote this for a travel journalism class. Information has been updated accordingly. You can also read more here.

Cambodia in March – right smack in the middle of the dry season – is a sweltering place to be. I wander ancient temples and busy village markets in a damp, sweaty haze. In my bid to escape the heat, I come upon monuments of another kind: Cambodia’s bookshops and libraries.

I duck into the cool shade. Grab a chair and a book, and order myself a cool drink. I could be here a while, but that’s okay. I’m not too eager to go back out in the sun anyway. I turn a page, and lose myself: in Cambodia’s rich religious history, her more recent tragedies, and in her dreams for the future.

The bookshop at the Buddhist Institute: The sastra, ancient palm leaf books

The Buddhist Institute, with the bookshop housed in the two smaller buildings on the left and right

The books here are housed in little temples of their own. In two octagonal buildings flanking the entrance to the Buddhist Institute, the bookshop stock books on Buddhist precepts and stories. Monks from all over Cambodia come here to Phnom Penh to buy these books for their study.

The Buddhist Institute is a research library. To gain entry, visitors only need to sign a logbook. Ask politely and the caretakers will let you take a look at their collection of ancient palm leaf manuscripts known as sastra – one of the oldest forms of recorded writing in existence. The sastra here date back to the 18th century.

In a dim anteroom upstairs, the books are piled haphazardly in cupboards with dust-stained glass doors. The doors are unlocked and I am allowed to touch these 200-year-old books – the original copies carved by monks long gone. My sweaty hands get sweatier.

On these palm leaves, senior monks painstakingly recorded Buddhist theory, as well as the legends and history of Cambodia and surrounding kingdoms. These books are a testament to the long history of Buddhism here, which dates back to the 5th century. Today, nearly 97% of the population is Buddhist.

Just as kings once built state temples in the heart of empires, present-day Cambodians are equally devout in honouring the Buddha. Bright red temple gates leading to village temples dot the highways snaking through the country. It is impossible to miss them; the eye is immediately caught by the elaborate bas-reliefs of the naga, the seven-headed snake deity present in both Hinduism and Buddhism.

Parallels like this between Hinduism and Theravada Buddhism, which is the type practised here, can make it difficult to distinguish between the two religions. It is no less confusing at the ancient temples of the Angkor complex.

Both Hindu and Buddhist monarchs ruled Angkor, the megacity of the Khmer Empire that thrived from the 9th to the 15th century. They repurposed temples built for one religion to suit the religion of the current ruler. To help yourself distinguish between the carvings of a Hindu god and of a Buddhist deity, you can purchase guidebooks from any of the mobile bookshops roaming Angkor.

When the woman sees the tour group, she sends her daughter out from the shade of the palm tree they are squatting under. The small girl in her school uniform trudges over, a basket hanging from her neck with strings filled with postcards and bracelets.

She holds up a postcard, frowning against the glare of the sun. Most of us shake our heads and move on. No sooner do we leave her that another child in a school uniform comes up to us with a basket, this time a boy with books like Angkor History. He looks grumpy; it is a sweltering day, and it’s after school but he is here selling books to tourists. 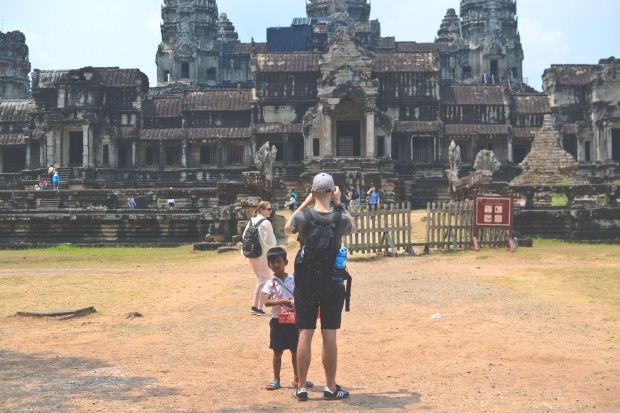 At Angkor Wat’s east entrance: A boy attempts to sell his books

Our guide at Angkor, Sun Vuth, says the children earn their pocket money this way. They buy these books, which are pirated photocopies, in the city for USD5 and sell them for USD6 to USD8.

“Maybe this is a bad way for other countries, but it’s a good way for the children here – they earn their own money,” says Vuth.

However, if it is so easy for the children to earn money from selling these books to tourists, they may not be motivated to go to school at all. It is this kind of thoughtless charity that Ian Croft, owner of New Leaf Book Cafe, hopes will stop.

The second-hand books at New Leaf Book Cafe are all donated, and go for USD5 each.

“If you educate people instead of just giving hand-outs, it prevents them from making bad choices,” says Ian.

We are in New Leaf Book Cafe, just a few minutes away from Pub Street, the drinking enclave for tourists. Books are lined up higgledy-piggledy along shelves on the red-brick wall, stuffed in crowded bookcases beneath the bar, and placed leaning against each other beneath a large blackboard announcing upcoming events. New Leaf is an inviting place to spend a few hours with coffee and a book.

Ian, owner of New Leaf Book Cafe, comes in once every three months to tidy up the bookshelves.

The cafe is run and managed by locals who are given training and taught proper savings techniques. All profits from the cafe go to educational projects for children and Cambodian-operated charities.

Non-governmental organisations (NGOs) have a strong presence in Cambodia. There are nearly 3500 registered NGOs, of which approximately half are active, according to the International Center for Not-for-Profit Law.

Ian admits that there is an “NGO culture” where “people expect things for free”, but he believes NGOs do help Cambodia. “I don’t think it’s about pitying people. It’s about a hand up, and not a hand-out,” says Ian. Hence, he focuses on educational projects that empower Cambodians.

But perhaps soon Cambodia would not need NGOs. Ian says: “At the end of the day, Cambodians are learning that it’s their hard work that’s going to fix the country.”

And people like Leng Kokan, whom I meet at Wat Ounalom, embody that potential Cambodia has.

At Wat Ounalom: Moving from bookshop to library

Leng Kokan in his office: He has been restoring palm leaf manuscripts for 26 years.

Back in Phnom Penh, I meet Kokan at Wat Ounalom, a 10-minute tuk tuk ride away from the Buddhist Institute. He works here with the French School of the Far East to restore old sastra. The 50-year-old greets us with firm handshakes in a shared office crammed with stacks of palm leaf manuscripts and thick black folders.

He has been restoring sastra for 26 years, since the fall of the Khmer Rouge regime. He states in an expressionless, matter-of-fact manner: “I was a child forced to work like an adult … Dig canals, grow rice.”

Talking to him, it is clear that Kokan is more focused on the present and the future. He is more animated when discussing his work on the sastra. He breaks into a wry smile when he says: “It was a headache when I first started because I didn’t know how to repair the sastra. But the more I read the sastra, the more I fall in love with them.”

Now he travels all over Cambodia to collect manuscripts that survived the Khmer Rouge and brings them to Phnom Penh. He does this because he worries about a future where all sastra would be destroyed and the Khmer history in them lost forever.

The Khmer Rouge destroyed everything, he says. Temples were left with remnants of sastra that he then has to piece together to make a whole. He laments the ignorance of the monks who fail to see the value of these ancient books and even burn them. But Kokan still dreams of creating a palm leaf library.

He hopes to collect all these manuscripts in one place, where they can be protected and the information and knowledge in them digitised. People can then come to this library to browse and pore over these books.

He has a dream and a hope for Cambodia, and is ready to move on from the shadow of the Khmer Rouge. Perhaps one day, instead of Tuol Sleng Genocide Museum or the Killing Fields, a palm leaf library would be the most important attraction in Phnom Penh.

If you would like a village tour that contributes back to the community, check out the tour packages by Husk Cambodia, an NGO.

yvette. this is a space for my thoughts on life, books, travel and everything in between.